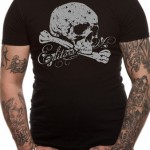 Genre: Indie rock, post-punk revival The British indie rock band was formed in the year 2002. The band is currently based in Birmingham although its origin was in Stafford, Staffordshire in UK. Originally the band was famous as ‘Pilot’, ‘The Pride’ and then later called as ‘Snowfield’. They changed their name to ‘Editors’ when they signed to Kitchenware Records. The … END_OF_DOCUMENT_TOKEN_TO_BE_REPLACED