You are here: Home > Cradle Of Filth 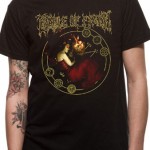 Genre: Extreme metal The English extreme metal band was formed in the year 1991 in Suffolk. Originally the music style of the band was black metal, although there were many variations with the inclusion of gothic metal, symphonic black metal and extreme metal in their music which was observed in the long run in their performances. The band came up with three demos titled … END_OF_DOCUMENT_TOKEN_TO_BE_REPLACED