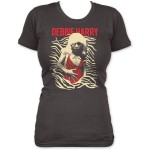 Deborah Harry of Blondie fame is considered to be one of the finest singers of all time. The singer has one of the best voices in the history of music.

Born on July 1, 1945, the American singer, songwriter and actress began her music career in late 1960s. She became a part of the folk rock group known as ‘The Wind in the Willows’. She left the group and joined The Stilettos in 1974. Chris Stein currently of the Blondie fame used to play for the band who became her future and eventual boyfriend. Both Harry and Stein left The Stilettos together to form Angel and the Snake. Soon the duo formed Blondie and came up with the band’s debut album in 1976 which became a huge commercial success.

Debbie Harry’s studio album titled ‘Koo Koo’ released in 1981 is one of the most successful albums of all time. Debbie also pursued an acting career meanwhile and appeared on various TV shows as well.