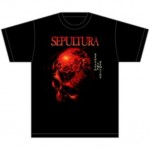 The name of the band is Portguese for ‘grave’. The Brazilian heavy metal band has been known to incorporate elements of groove metal, thrash metal, death metal and alternative metal sub-genres in their music. The band’s latest experiments include nu metal, hardcore punk and industrial as well. Sepultura was formed in the year 1984 in Belo Horizonte, Minas Gerais in Brazil. The early years of the band saw several live gigs after which the band signed to Cogumelo Records in 1985. The band released ‘Bestial Devastation’ which was a shared EP with Overdose. The band has, ever since its formation, released 12 studio albums. They achieved mainstream commercial success with albums like ‘Arise’ in 1991, ‘Chaos A.D.’ in 1993 and ‘Roots’ in 1996. The band has sold more than 3 million copies in US alone and almost 20 million worldwide. Their several albums have gained gold and platinum certifications in different countries all across the globe.